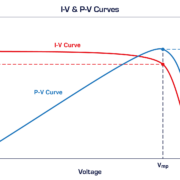 Through our work as an Owner’s Engineer, PV Pros has extensive experience evaluating, inspecting, and commissioning PV power systems. While I-V curve tracing is an essential tool in these efforts, it is not necessarily the best tool for every job. Moreover, some common pass-fail metrics involving I-V curve tracing may not be adequate to achieve the intended result.

Here I provide a brief overview of the benefits of I-V curve tracing and share insights regarding its strategic use for project commissioning and inspection purposes. In the process, I highlight common myths regarding I-V curve tracing that may inadvertently lead to inefficiencies or ineffectiveness during project delivery.

I-V curve tracers are indispensable as a diagnostic tool because of this ability to effectively visualize all of the current and voltage operating points of a PV source. The tool not only captures essential static electrical test characteristics, such as Isc and Voc, but also captures important dynamic operating characteristics, such as Pmp. The overall shape of the I-V curve, meanwhile, reveals whether the PV source is healthy or impaired. Moreover, if a measured I-V curve differs substantially from the predicted curve, the nature of the deviation will determine or provide clues regarding the probable failure mode.

By virtue of these capabilities, I-V curve tracers are ideally suited for identifying the symptoms of underperformance in PV power systems. No other piece of electrical test equipment provides as much relevant information about the operation and health of a PV module or string. Every PV system commissioning agent or operations and maintenance (O&M) technician should have access to an I-V curve tracer and know how and when to use it safely and effectively.

I-V curve traces conducted during commissioning establish a highly granular performance baseline for a new PV asset. This basis of comparison is invaluable during project operations for understanding plant performance, health, and degradation over the life of the system.

Pass-Fail Criteria. Fill factor is the most common contractual pass-fail metric for I-V curve tracing. This metric expresses the squareness of the I-V curve and is calculated by dividing the Pmp by the product of the Isc and Voc. Contractually, the pass-fail threshold for fill factor is typically 70%. In this scenario, strings with a fill factor below 70% fail to meet the contractual requirements and are flagged for investigation and corrective action; strings with a fill factor of 70% or greater are accepted as having passed inspection.

Generally speaking, a performance factor greater than 90%, coupled with a normal curve shape, is an acceptable pass-fail metric for an operational PV power system. During project commissioning, however, when PV modules with a positive power tolerance are newly installed and reasonably unsoiled, a 90% performance factor allowance is not adequately rigorous as a screen for defects, as it will allow some potential issues to go undetected.

In order to flag all probable deficiencies during commissioning, PV Pros recommends that owners and financiers establish a performance factor of 95%, after normalizing for STC, as secondary pass-fail criteria. By using a 95% performance factor as filtering criteria, it is possible to isolate and scrutinize secondary issues that may affect string-level performance. Upon further investigation, this more rigorous pass-fail screen may reveal subtle deficiencies such as modules that are not producing to the manufacturer’s warranty. Alternatively, if the I-V curve shape and other performance metrics check out, the owner’s engineer may determine that a performance factor greater than 90% but less than 95% is acceptable. 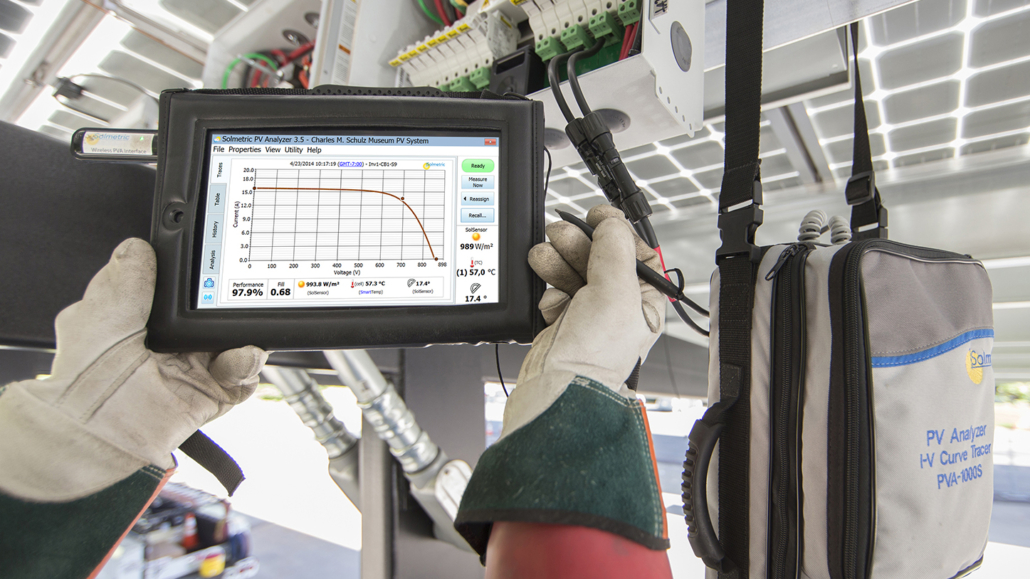 After the commencement of project operations, I-V curve tracing is best used in support of more resource-efficient inspection methodologies. For reasons I outlined in a previous blog post, aerial imaging is an ideal inspection tool for fielded assets.

As compared to using boots-on-the-ground resources to I-V curve trace an entire PV power plant, aerial inspections are faster, cheaper, and produce more predictable results. In some cases, piloted aircraft can inspect an entire PV power system in less than a minute with a single flyover. The resulting digital record is very easy to interpret, as compared to I-V curves captured under changing weather conditions at different times of the day or week. Last but not least, aerial inspections reduce exposure to electrical hazards.

Operational Efficiencies.Solar project O&M activities are most efficient when owners rely on aerial imaging for bulk inspection purposes. Based on the results of these aerial inspections, asset managers and O&M providers can identify the specific locations in need of corrective actions. Moreover, it is possible to prioritize these efforts based on performance impact, perhaps resolving issues at the inverter level before moving to the string level, module level, and finally the sub-module level.

In this context, I-V curve tracing is really the third line of defense for maintaining solar project performance during operations. The first step for maintaining plant performance is to conduct periodic aerial inspections. The second step is to prioritize and conduct investigations based on the resulting aerial images. Based on the outcome of these investigations, the third step is to use I-V curve tracing in support of troubleshooting activities or a warranty claim. In an operational system, in other words, I-V curve tracing is most effective when it is conducted selectively and strategically on an as needed basis, rather than indiscriminately as a bulk inspection tool.

If you are looking for ways to optimize PV project performance assessment, commissioning, or inspection activities, contact PV Pros to learn more about our Independent Engineering and Owner’s Engineering services.